People always ask me how I began as a speaker. Believe it or not, the answer is very simple – by reciting in the classroom.

Ever since childhood, I was already interested in public speaking – and to some extent, broadcasting. I remember filling in a notebook with random quotes from a book called “American Government” and reciting it in front of my mom and my grandmother – as if I was giving a speech. At times I would stand in front of our visitors and tell them what I have seen on TV as if I was hosting my news program. My mom was very supportive and she kept on encouraging me to develop my interest. She would listen to my “news reports,” cheer me on, and give me constructive feedback on how I should improve my pacing and delivery.

Now while I already liked public speaking during grade school, it was only during high school that I got the opportunity to pursue this interest. During my freshman year in high school (2008), we had lots of group reports and plays in our English class. I really enjoyed speaking in front of the class. Because of that, I always took recitations seriously – even citing quotations from the books I’ve read.

I think Mrs. Ramos, our freshman high school English teacher,  realized how I loved public speaking. Soon enough, she asked me to lead one of the school’s “reflections” during the flag ceremony. In public schools such as ours, the morning assembly runs like this: all the students and faculty would assemble, we would sing the national anthem, recite the oaths, then before the program ends a chosen student would deliver a motivational speech.

And so I tried it. I still remember how anxious I was during that memorable day. The entire was school was in front of me. I held the microphone with my right hand and had my speech in my left – my hands were shaking. I cleared my throat, introduced myself, and began reading my script. Midway through my speech, the jitters went away and like a ballerina who dances graciously, I found my flow and enjoyed every single moment on stage. I ceased from reading my manuscript and just spoke spontaneously.

It was a pleasant surprise that the students received my speech gladly. In the next flag ceremony, I was invited to speak again, and then in the next – and the next. With my frequent exposure during the morning assemblies, students from all year levels began calling me “mayor” (perhaps because our mayor would always give speeches in public).

I became a frequent representative of our school on all competitions that need speaking – extemporaneous speech, oration, “balagtasan” (poetic competition), etc. I was also trained as a student leader and I became the school’s, and eventually the city’s, student council president. During my junior year, I also started becoming well-acquainted with a teacher who would eventually become my mentor on leadership, my friend, and a close father figure.

Mr. Emmanuel Icogo helped me craft my first ever leadership training for our students. I based it from the 7 Habits of Highly Effective Teens by Sean Covey. It wasn’t a perfect workshop, but it was instrumental for me to realize that I really love using public speaking in helping people develop themselves.

Through my regular chats with him, I also realized the course that I wanted to take in college. He walked me through all my interests and helped me sift through my other options. On my senior year, I finally decided that I will be a leadership trainer and a human resources practitioner (today, I am a teacher and the HR Specialist of our school).

I got accepted in the Human Capital Development program of my dream school, the University of Asia and the Pacific (UA&P). My friends from my high school and other schools also became student leaders in their own universities. Soon, I found myself being invited by them to give talks and trainings in their organizations. One invitation led to another and before I knew it, I was already giving talks to different schools in different cities almost every month.

In one of my speaking engagements, broadcaster Ada Cuaresma invited me to guest in her program called School of Life Radio in DZIQ. Soon, I found myself hosting that very show where I guested. The producer of that show, Pocholo Gonzales, became my friend and mentor in media and he also opened to me opportunities to have experience broadcasting in DZRH, DZXL, and DZRJ.

Looking back, I realized that doing little and simple things such as reciting in class extraordinarily well pays off in the end. I also saw how a simple encouragement can go a long way; and I have discovered how mentoring can inspire someone to take the path of continuous learning and development.

It was more than seven years ago when I started giving talks and trainings. I have surely grown a lot, thanks to everyone who trusted me and helped me to become the speaker that I am today.

I think that despite the years of speaking experience I’ve had on stage, on-air, and in the classroom, I am still at the beginning of a long journey. I have surely taken the baby steps forward, but I still have a long way to go – I still have more chapters to write in my story as a speaker, broadcaster, and a teacher.

If you wish to know more about me as a speaker, you may check my profile or you may invite me to speak at your event. 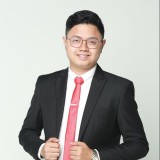 Bernz is a Catholic revert, educator, and speaker. As a former anti-Catholic Protestant, he helps ordinary Catholics understand their faith deeply so they can explain it clearly without being preachy.

He hosts his own podcast (Unboxing Catholicism) and YouTube vlog where he uncovers the truths and lies about Catholic teaching and spirituality. He also travels around the country giving talks on faith, leadership, and personal finance.